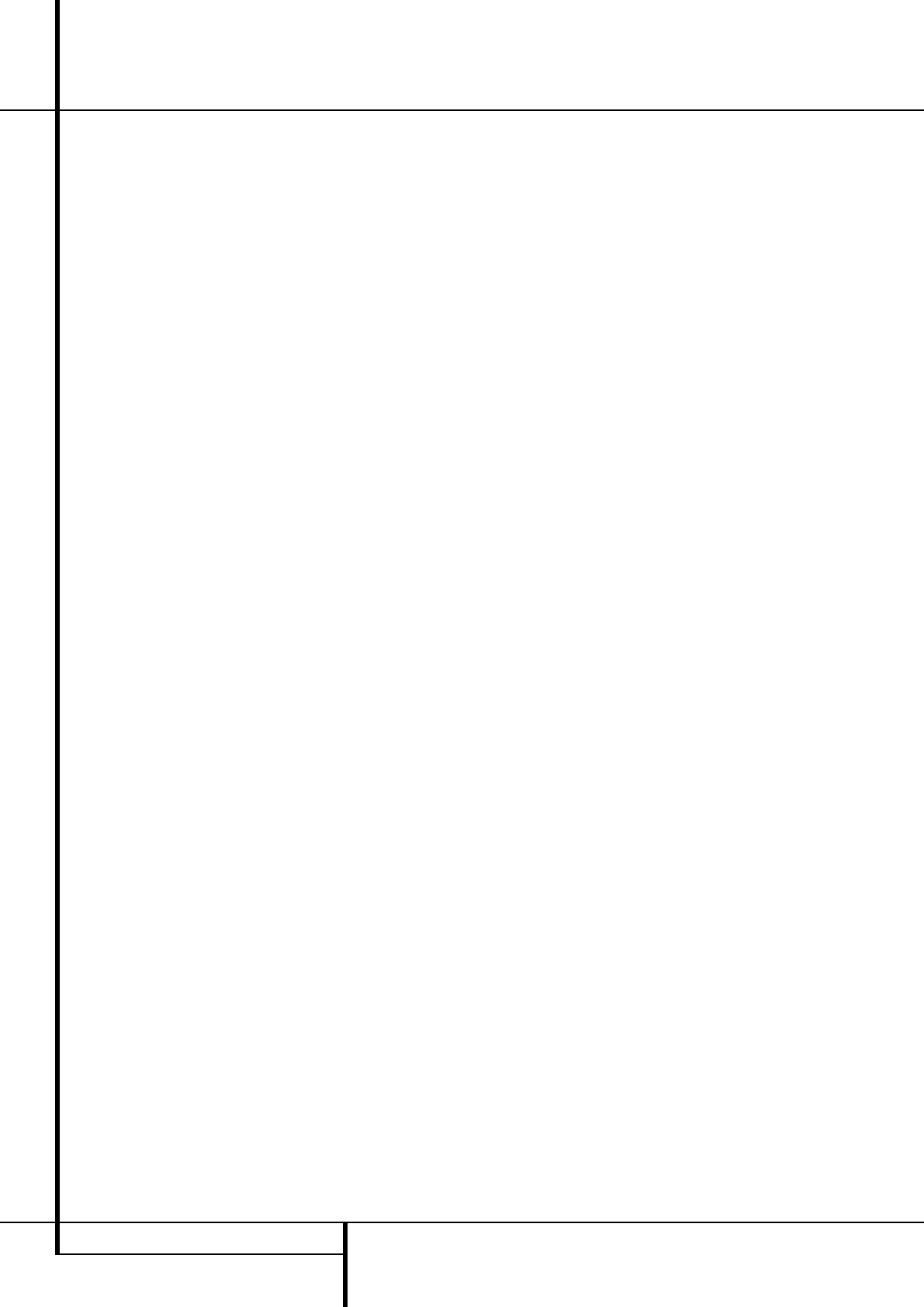 36 MULTIROOM OPERATION
Multiroom Operation
To operate the multizone system using the
remote, slide the Zone Select Switch at the bot-
tom of the remote to the“2” position or, alter-
natively use the Zone 2 Remote Control (AVR
355 only). Press a Source Selector to select a
source input for the remote zone.
Adjusting the volume or mute controls will only
affect the volume in the remote zone.The on-
screen menu functions will not be operative.The
remote will operate source devices that have
been programmed into it as explained in the
Initial Setup section.
If the Remote IR Output jack
U
on the AVR
is connected to an IR Input jack on compatible
Harman Kardon audio components such as CD,
DVD or cassette players, the transport functions
of those machines may also be controlled using
the Transport Controls
H
E on either
remote control.
NOTE: When the tuner is selected as the source
for Zone 2, any change to the frequency or pre-
set will also change the station being listened to
in the main room, if the tuner is in use there.
Similarly, if someone in the main room changes
the station, the change will also impact the
remote room.
When Zone 2 is turned on, the input selected
using the Zone 2 Menu will be fed to the Zone 2
Output jacks
b
on the rear panel as well as the
A-BUS Jack
c
, (AVR 355 only).
The volume will be as set in the same menu,
although it may also be adjusted using an
optional IR sensor and the Zone II remote in the
remote location or on the optional audio power
amplifier connected to the Zone 2 Output jacks
b
.
Although changes to the input source or Zone 2
volume will normally be made using an IR sensor
in the remote room that is connected to the
AVR, it is also possible to change those settings
from the main listening room.This is useful for
situations where some or all of the remote
rooms do not have an IR sensor, or to take
c
ontrol over the remote room without actually
being in that room.
Once Zone 2 is turned on, it will remain on even
if theAVR is placed in the Standby mode in the
m
ain room by pressing the Power Off Button
B
or the System Power Control
2
on the
front panel.To turn off the multiroom system
from the main listening room,when the AVR is
on, slide the Zone Select Switch
Z
on the
Remote Control to Zone 2 (or, alternatively, use
the Zone 2 Remote Control that comes with the
AVR 355 only), and press the Off Button
B
.
Even when the AVR is turned off (to Standby
mode) and the multiroom system is turned off
too, the multiroom system may be turned on at
any time by pressing the ON Button
A
while
the Zone Select Button is set to Zone 2.
NOTE: Only analog audio sources are available
to the multizone system.To hear digital devices,
such as a CD player,in the remote zone, follow
these steps:
1. In addition to a digital audio connection,
connect the source device’s analog audio
outputs to any available analog audio inputs
on the AVR, noting in TableAA in the
appendix which set of inputs was used.
2. In the Setup Source menu, leave the Audio
Source setting at the digital audio input.
However, scroll down to the Zone 2 Audio
setting and select the analog audio source
used in step 1.
Multiroom Operation
previous next