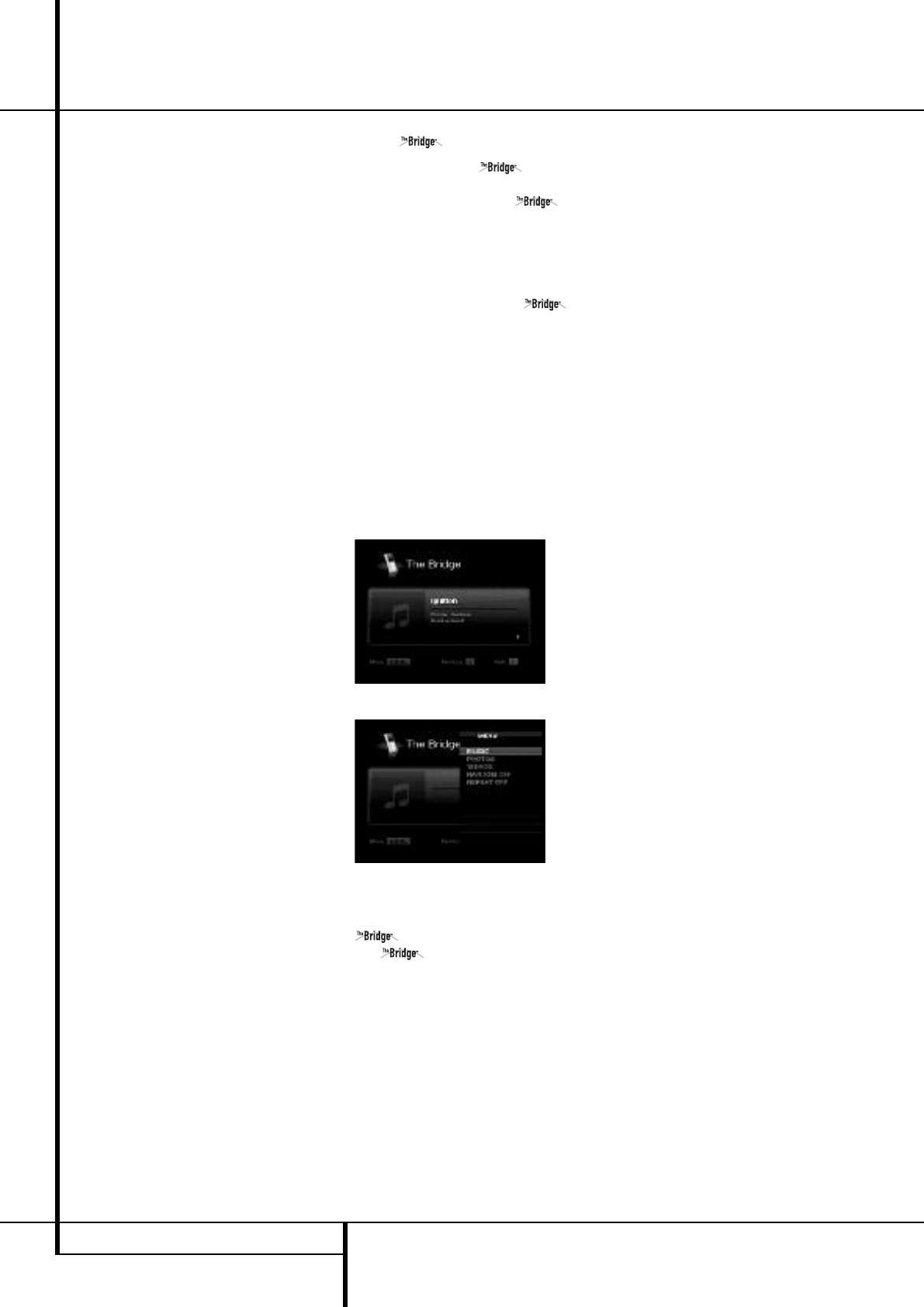 34 OPERATION
Operation
Night Mode
Night mode is available with some Dolby Digital
p
rograms, if it has been encoded in the material.
It compresses the peak sound levels, maintaining
the intelligibility of the dialogue and quieter
passages, while reducing the loudness of special
effects and louder passages to avoid disturbing
others. Night Mode is accessed from the Audio
Effects menu. Press theAudio Effects Button and
scroll down to the Night Mode line.Three levels
of compression are available:
Off: At this setting, there is no compression, as
the Night mode is deactivated.
Half: A mild compression is applied.
Full: More compression is applied.
Feel free to experiment and simply cycle through
all of the available surround modes at any time;
you cannot cause any problems for the AVR 355/
AVR 255 by doing so.
NOTE: To access 6.1- and 7.1-channel modes,
such as Dolby Digital EX, DTS-ES, Logic 7 (7.1
modes), DTS Neo:6 (6.1 modes), and 7-channel
Stereo, you must enable the surround back
channels as explained in the Manual Setup
section.You should not enable these channels if
you don’t have surround back speakers in your
system.
Tape Recording
In normal operation, the audio or video source
selected for listening through theAVR is sent to
the record outputs.This means that any program
you are watching or listening to may be record-
ed simply by placing machines connected to the
outputs for Analog Outputs
3
or Video 1
Outputs
P7
in the record mode.
When a digital audio recorder is connected to
the Coaxial Digital Output
A
, you are able
to record the digital signal using a CD-R,
MiniDisc or other digital recording system.
NOTES:
•The digital outputs are active only when a digi-
tal signal is present,and they do not convert an
analog input to a digital signal,or change the for-
mat of the digital signal (e.g. Dolby Digital to
PCM or vice versa). In additon, the digital recorder
must be compatible with the output signal. For
example, the PCM digital output from a CD player
may be recorded on a CD-R or MiniDisc, but
Dolby Digital or DTS signals may not.
• To make an analog recording from a digital
source is possible, but only from a PCM source
(not Dolby Digital or DTS) and correctly only with
"Surround Off" mode (with any Surround mode
only the L/R front signals will be fed to the
record outputs).
Using (AVR 355 only)
When Harman Kardon’s (optional) is
c
onnected and a compatible Apple® iPod® is
docked in The Bridge, press the DMP
Selector Button C on the Remote Control or
the Source List @ followed by the Up/Down
Arrows to choose the iPod as the input source
allowing playback of audio, video and still-image
materials on your iPod through your high-quality
audio/video system. Pressing the DMP
Selector Button C will also activate theAVR
r
emote’s control codes for the iPod, and you may
also use the front-panel controls to operate the
iPod.
When The Bridge is properly connected and a
compatible iPod is properly docked, the Upper
Display Line
#
will read DMP/
CONNECTED
. Once that message appears,
use the remote or front-panel buttons to control
the iPod. See the Function List Table on page 46
for a listing of the remote control buttons that
have been programmed to control the iPod.
Figure 16 - On Screen Display, iPod playing
Figure 17 - On Screen Display, iPod Menu
Selection
Complete details on operating an iPod using
and an AVR remote are furnished
with .
While a selection is playing, the song title, artist
and album name, if available on the iPod,will
scroll across the upper line in the front panel
Message Display
#
.The lower line will
display the elapsed time of the track on the left,
the play mode icon, and the time remaining on
the right.
In addition, if a video display is connected to the
AVR, a screen will appear briefly to display infor-
mation about the iPod’s status and the track.The
top line will display the play mode icon, with the
phrase “Now Playing” appearing to the right to
remind you that you are viewing the status of
the current track, as opposed to another menu
s
creen. Below that the AVR displays the total
number of tracks in the current play list on the
right (all materials on the iPod are considered
one of the play lists) with the number of the
current track on the left.The song title, artist and
album are displayed.At the bottom of the screen
is a graphic bar indicating the current play
position within the track, with the elapsed and
remaining times appearing below the bar.
After a period of time the screen may disappear
from view.The length of time is set using the
Full-OSD Time Out setting in the System Settings
menu (described in the Advanced Functions sec-
tion). You may restore the Now Playing screen to
view by pressing either of the
‹
/
›
Buttons
F
,
and you may then navigate the menus as
explained above.
NOTE: It is strongly recommended that you use
a screen saver built into your video display to
avoid possible damage from “burn-in” that may
occur with plasma and many CRT displays when
a still image, such as a menu screen, remains on
display for an extended period of time.
Memory Backup
This product is equipped with a memory backup
system that preserves tuner presets and system
configuration information if the unit is turned off
completely, accidentally unplugged or subjected
to a power outage.This memory will last for
approximately two weeks, after which time all
information must be reentered.
previous next