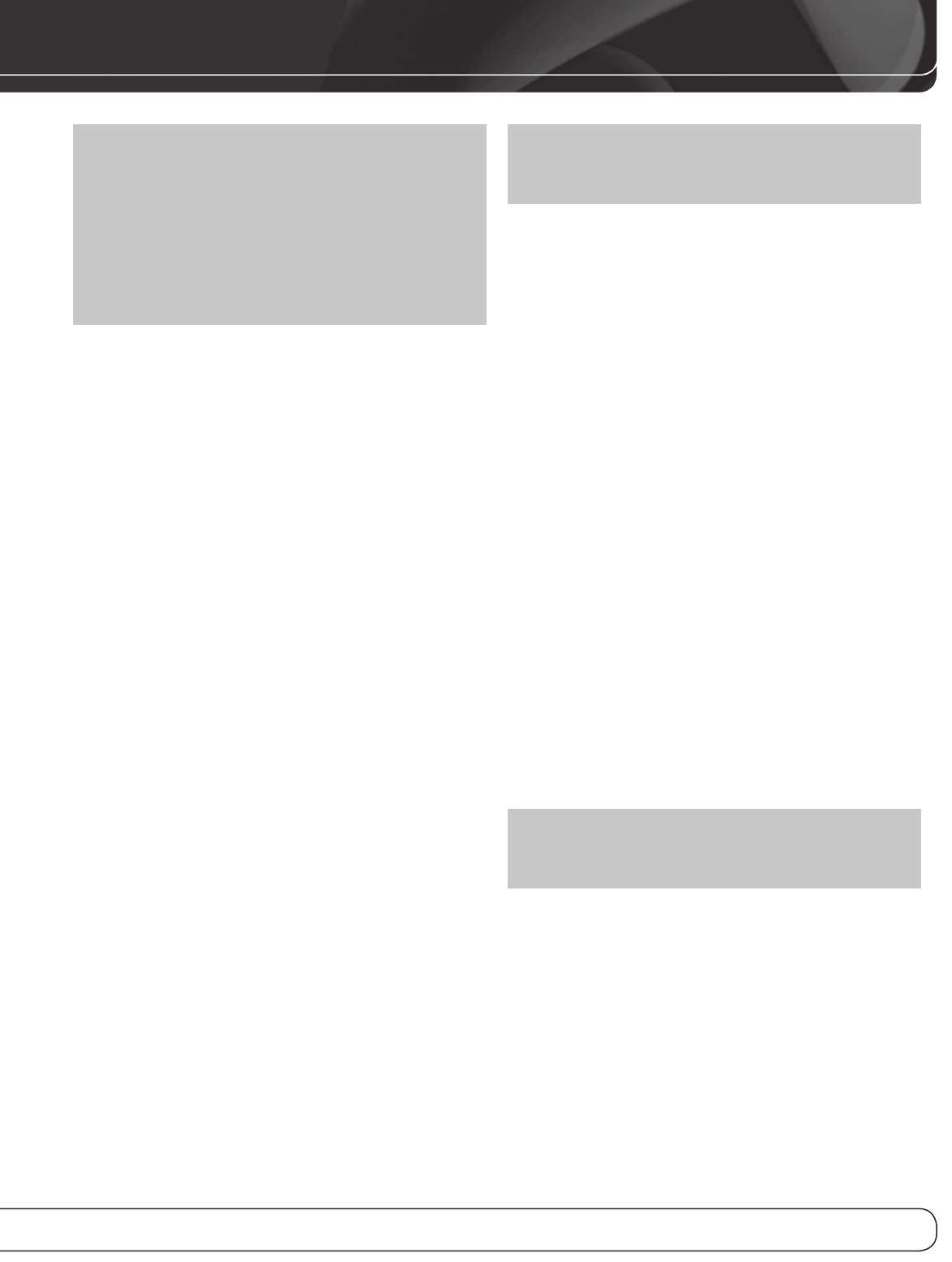 35
ADVAnCED FUnCTiOnS
NOTES:
• It is not necessary to program the remote to control your
DVD player’s transport controls while the AVR, VID2 or VID3
devices are in use, as the remote is preprogrammed at the
factory with this function.
• When in DVD device mode, the remote may be used to control
either a DVD player or a Harman Kardon Blu-ray Disc
player. To toggle between these two device modes, press
and hold the DVD Input Selector until it flashes. The factory
default is to operate a Harman Kardon Blu-ray Disc player.
To program punch-through control while operating any device:
1. Press and hold the Input Selector (or AVR selector) for the main
device the remote will be operating until the Program LED flashes
and the remote enters Program mode.
2. Select the type of punch-through programming.
a) Volume Control: Press the Volume Up Button.
b) Channel Control: Press the Volume Down Button.
c) Transport Control: Press the Play Button.
3. Press the Input Selector (or AVR Selector) for the device whose
volume, channel or transport controls you would like to be active
while operating the device you selected in the first step. The LED
will flash green to confirm the programming. For example, if you
wish to watch your TV (programmed into the Video 3 Button)
while changing channels using your cable box (Video 2), first
press and hold the Video 3 Button until the LED flashes. Then
press the Volume Down Button, followed by the Video 2 Button.
To undo punch-through programming, follow the same steps as
above, but press the same Input (or AVR) Selector in Steps 1 and 3.
You may reassign the transport control punch-through programming
for the AVR, VID2 and VID3 devices to other devices, such as CD. If
you wish to remove transport control punch-through altogether for
the AVR, VID2 or VID3 device, follow the same procedure as for
programming punch-through, but in Step 3 press either of the
other two of these three special selector buttons. For example, to
remove punch-through transport control from the VID3 device so
that pressing any of the transport controls will have no effect, press
and hold the VID3 Button until the Program Indicator LED flashes in
amber, then press the Play Button, followed by either the AVR or VID2
Button.
Macros
Macros are used to program sequences of up to 19 commands that
are executed with a single button press. Macros are well suited for
power on and off commands, or to send out a favorite multidigit
channel number with one button press, or to have the ability to
send out a code sequence to control a device while the remote is
operating another device, but with more flexibility than the built-in
punch-through controls.
Some commands may not be programmed into macros: Mute, Dim,
or Channel Up/Down.
NOTE: Use caution when programming complicated macros.
It isn’t possible to program a pause or delay before sending
commands after Power On, and the component may not be ready
to respond to commands instantaneously after powering on.
To program, or “record”, a macro, follow the steps below.
1. Simultaneously press one of the four Macro Buttons, or the
Power On Button, and the Mute Button to enter program mode.
2. Press the Input (or AVR) Selector for each device before you enter
commands to be transmitted to that device. This step counts as
one of the 19 commands allowed for each macro.
3. For the Power On command, DO NOT press the Power On Button.
Press the Mute Button instead.
4. Press the Power Off Button to program the Power Off command.
5. Press the Sleep Button to end the programming process.
To execute the macro, press the Macro Button, or the Power On
Button, selected in the first step of programming the macro.
It isn’t possible to “edit” a command within a macro. However, you
may erase the macro as follows:
1. Simultaneously press and hold the Mute Button and the Macro
Button containing the macro until the LED flashes.
2. Press the Channel Down Button to erase the macro.
Resetting the Remote
To reset the remote to its factory defaults, simultaneously press
and hold any Input Selector and the “0” Numeric Key. When the
Program LED flashes in amber, enter the code “333”. When the
green LED goes out, the remote will have been fully reset.
PROCESSOR RESET
If the unit behaves erratically after a power surge, first turn off
the Main Power Switch and unplug the AC power cord for at least
3 minutes. Plug the cord back in and turn the receiver on. If this
doesn’t help, reset the AVR.
NOTE: A system reset erases all user configurations, including
Source settings, speaker and level settings, and tuner presets.
After a reset, reenter all of these settings from your notes in
the appendix worksheets.
To reset the AVR 1600, place it in Standby mode (press the front-
panel Standby/On Switch so that the Power Indicator turns amber).
Then press and hold the front-panel Surround Mode Button for at
least 5 seconds until the RESET message appears.
If the receiver does not function correctly ofter a processor reset,
contact an authorized Harman Kardon service center for assistance.
Authorized service centers may be located by visiting the Web site
at www.harmankardon.com.
MEMORY
If the AVR 1600 is unplugged or experiences a power outage, it will
retain user settings for up to four weeks.
previous next