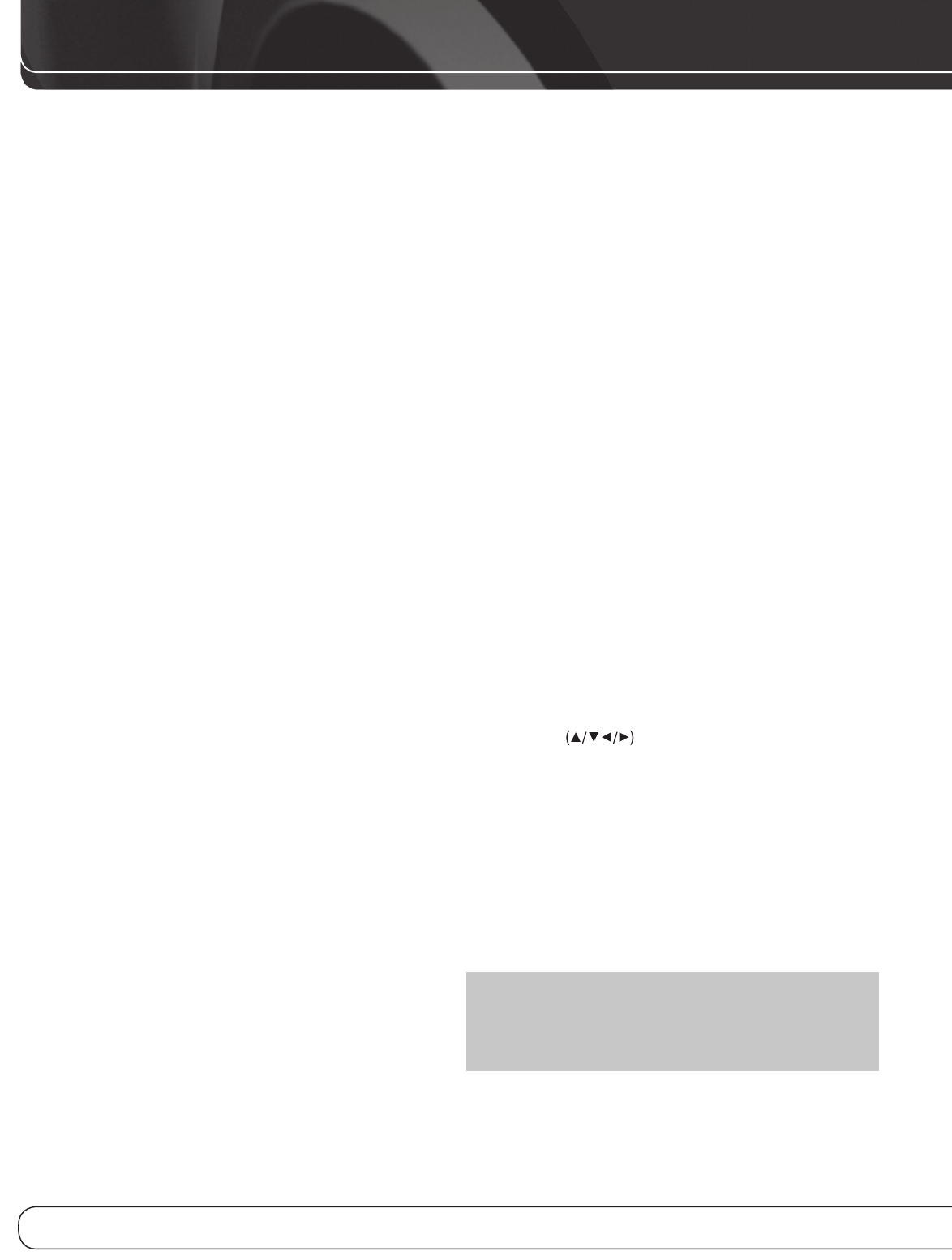 12
REMOTE COnTROL FUnCTiOnS
The AVR 1600 remote is capable of controlling up to 11 devices,
including the AVR itself and a device connected to the Auxiliary
Input. During the installation process, you may program the codes
for each of your source components into the remote. Each time you
wish to operate any component or the AVR, first press its Selector
Button to change the device mode to the appropriate codes.
Each Input Selector has been preprogrammed to control certain
types of components, with only the codes specific to each
brand and model changing, depending on which product code
is programmed. The device types programmed into each selector,
except the HDMI selectors, may not be changed.
DVD: Controls Harman Kardon Blu-ray Disc players, and
many brands of DVD players and recorders.
CD: Controls CD players and recorders.
Tape: Controls cassette decks.
Video 1: Controls VCRs, TiVo
®
devices and DVRs, and
the Harman Kardon DMC 1000 digital media center.
Video 2: Controls cable and satellite television set-top boxes.
Video 3: Controls televisions and other video displays.
HDMI 1, 2 and 3: Each code set controls a source device
(VCR/PVR, DVD player or cable/satellite set-top box) connected to
one of these inputs.
AUX: Controls a device connected to the Auxiliary Input.
Any given button may have different functions, depending on which
component is being controlled. Some buttons are labeled with these
functions. For example, the Sleep Button is labeled for use as the
Channel Up Button when controlling a television or cable box. See
Table A10 in the appendix for listings of the different functions for
each type of component.
IR Transmitter Lens: As buttons are pressed on the
remote, infrared codes are emitted through this lens.
Power On Button: Press this button to turn on the AVR
or another device. The Main Power Switch must first have been
switched on.
Mute Button: Press to mute the AVR 1600’s speaker and
headphone outputs. To end the muting, press this button, adjust
the volume or turn off the receiver.
Program Indicator: This LED lights up or flashes in one
of three colors as the remote is programmed with codes.
Power Off Button: Press to turn off the AVR 1600 or
another device.
AVR Selector: Press to switch the remote to AVR device
mode.
Source Selectors: Press one of these buttons to select
a source device, e.g., DVD, CD, cable TV, satellite or HDTV tuner.
This will also turn on the receiver and switch the remote’s device
mode to operate the source.
AM/FM Button: Press this button to select the tuner as the
source, or to switch between the AM and FM bands.
6-/8-Channel Input Selector: Press this button to
select the 6-/8-Channel Inputs as the audio source. If a signal is
present at the component video inputs assigned to this source,
it will be used. If not, the receiver will use the video input and
remote control codes for the last-selected analog video source.
Test Tone: Press this button to activate the test tone for
manual output-level calibration.
TV/Video: This button has no effect on the receiver, but is
used to switch video inputs on some video source components.
Sleep Button: Press this button to activate the sleep timer,
which turns off the receiver after a programmed period of time of
up to 90 minutes.
Channel Controls: These buttons have no effect on the
receiver, but are used to change channels on TVs and some video
sources.
Volume Controls: Press these buttons to raise or lower
the volume, which will be shown in decibels (dB) in the Message
Display.
On-Screen Display (OSD): Press this button to activate
the on-screen menu system.
Channel Level: Press this button to adjust the output levels
for any channel so that all speakers sound equally loud at the
listening position.
Speaker Setup: Press this button to configure speaker sizes,
that is, the low-frequency capability of each speaker.
Navigation and OK Buttons: These buttons
are used to make selections within the on-screen menu system, or
when accessing the functions of the four buttons surrounding this
area of the remote – Channel Level, Speaker Setup, Digital Input or
Delay.
Digital Input Select: Press this button to select the spe-
cific digital audio input (or analog audio input) to which the current
source is connected.
Delay: Press this button to set delay times that compensate for
placing the speakers at different distances from the listening posi-
tion, or to resolve a “lip sync” issue that may be caused by digital
video processing.
NOTE: The Channel Level, Speaker Setup, Digital Input
Select and Delay functions may also be adjusted using the
OSD on-screen menus. In addition, the EzSet/EQ system
may be used to adjust the Channel Level, Speaker Setup
and Delay settings automatically.
Numeric Keys: Use these buttons to enter radio station
frequencies or to select station presets. Press the Direct Button
before entering the station frequency.
previous next